Raleigh Plastic Surgery Center takes great pride in the experience, skill, and artistic creativity of our surgeons. Considered to be among the leading board certified plastic surgeons in North Carolina, Dr. High and Dr. Lyle are indeed special and sensitive to the needs of our patients. 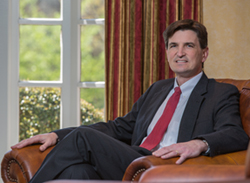 Dr. Rhett High joined Raleigh Plastic Surgery Center in 1996 and is actively engaged in the practice of plastic and reconstructive surgery. He was Board Certified by the American Board of Plastic Surgery in 1999, and he was re-certified in 2009. Dr. High completed his undergraduate bachelor of science degree at Pennsylvania State University He then went on to attend medical school at Johns Hopkins University, his general surgery residency at the University of Florida and his plastic and reconstructive surgery fellowship at Wake Forest University School of Medicine. Dr. High was also a Clinical Assistant Professor for the Department of Surgery at the University of North Carolina.

Board Certified by the American Board of Plastic Surgery: 1999 (Re-Certified 2009)

Board Certified by the American Board of Plastic Surgery: 1996 (Re-Certified 2006)

Our Surgeons
Our Facility
Our Staff
Go to Top